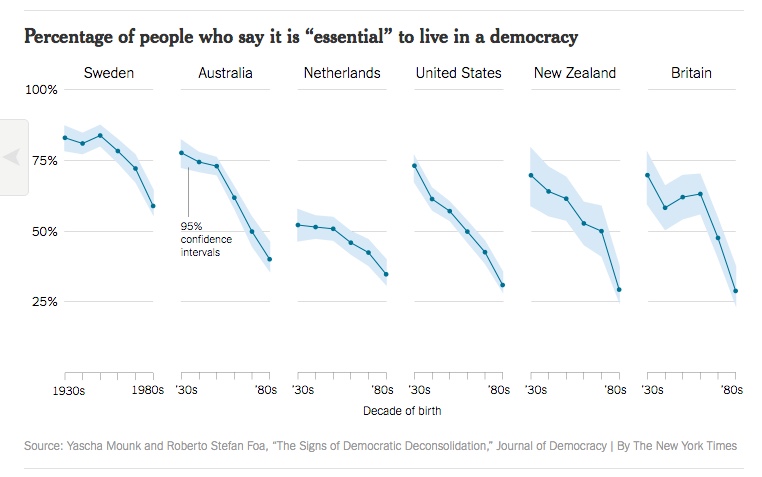 Politicians and bureaucrats are transferring power from the people to themselves. There is corporatism, where politicians and Big Business join forces to circumvent a proper democratic process. Our civil rights are being thwarted for a number of different reasons. And there is a noticeable and growing democratic deficit.

Apparently, the people is now drifting into resignation and defeatism. Especially the young. The chart above is from the NYT article: How Stable Are Democracies? ‘Warning Signs Are Flashing Red’ »

According to the Mounk-Foa early-warning system, signs of democratic deconsolidation in the United States and many other liberal democracies are now similar to those in Venezuela before its crisis.

Across numerous countries, including Australia, Britain, the Netherlands, New Zealand, Sweden and the United States, the percentage of people who say it is “essential” to live in a democracy has plummeted, and it is especially low among younger generations.

Naturally, one can understand why people are disillusioned about democracy. Politicians are accumulating power – but are not in contact with ordinary people, their lives, and their worries. One could argue that our political leaders are not even in contact with reality. The political elite seems to be incompetent while at the same time being arrogant and condescending.

People being fed up with politics and bureaucracy is quite understandable. But what is the alternative?

I fear that it will not be enlightened philosopher kings that will rule us. Nor will it be a libertarian minarchism where people are free and live in harmony. Other, more aggressive, forces will be at play.

Authoritarian populists, the military, communists, SJW, fascists… The »alternatives« to democracy are all rather unpleasant, will lead to oppression – and will not respect the individual, her civil rights, and freedoms.

I can agree that democracy in some ways is a problematic system with very real built-in dilemmas and faults. I also fully agree that most of today’s politicians are dimwits and that many of them are dangerous.

But, still – I find democracy the least bad system.

However, democracy would gain greatly from being trimmed down – focusing on society’s core functions, doing what is important well – and then leaving people free to live their lives pretty much as they want. Maybe that is the only way to save democracy, in the long run.

Henrik “HAX” Alexandersson is a Swedish writer, thinker and political evangelist. Between 2009 and 2014 he worked in the European Parliament for the Swedish Pirate Party.
View all posts by HAX →
FBI going global
EU insist on non-transparent rules for net censorship