IPRED — the EU Intellectual Property Rights Enforcement Directive — was highly criticised when introduced. It gave IPR holders wider rights to go after e.g. illegal filesharers than the police, skewing the legal system in favour of the industry. (But even then, IPRED has never been really effective.)

In 2014, the Italian EU presidency announced its’ plans to beef up IPRED. On this blog, I quoted the reaction from Brussels-based NGO EDRi on the matter…

“However, having established that the current legislative framework is not fit for purpose, the best thing that the Presidency can think of proposing is to expand and deepen the failed, not fit for purpose enforcement measures that are currently in force. The Italians apparently hope that, if they do the same thing over and over again, different results will be produced.”

But such objections do not discourage Brussels. The political process continues.

Preparing IPRED 2 the European Commission now has launched a consultation (normally being the first step for new or revised legislation). Once again EDRi explains it best…

“Injunctions, internet blocking, blackmailing of individuals accused of unauthorized peer-to-peer filesharing – the so-called IPRED Directive has been very controversial. Now, the European Commission has launched a consultation on the Directive (whose full name is Directive 2004/48/EC on the enforcement of intellectual property rights (IPRED) in the online environment).”

“The consultation is of great importance not only to those working on copyright or “intellectual property rights” in general, but in fact crucial to anyone using the Internet. This consultation covers to how private companies should or should not be involved in law enforcement online – for example by removing your online content in case it might include copyrighted material. It also covers the range of internet intermediaries that could or should be subject to legal obligations to undertake law enforcement activities.”

This consultation is open for everyone to respond to. And as political processes are easier to influence the earlier you get into them, this is an opportunity that should not be missed.

In order to make it easier for individuals to answer the consultation, EDRi has created an “answering guide” – an online tool with the European Commission’s questions and our analysis to guide your responses. The answering guide can be found here: http://youcan.fixcopyright.eu/limesurvey/index.php/829127?lang=en

Please get involved. Your reactions can shape the future of the Internet.

And a big thank you to EDRi for hacking the political system — analyzing, explaining and opening up the process for everyone to participate.

Apple is already thinking about ways to make it harder to hack iPhones, reports say. According to the New York Times, the company wants to prevent passcode-free recovery mode in future iPhones. According to the FT, Apple also wants to encrypt iPhone backups on iCloud.

Techcrunch: Apple Plans To Make iPhone And iCloud More Secure To Keep The Government Away »

Julian Sanchez: This Is the Real Reason Apple Is Fighting the FBI »

1. This offers the government a way to make tech companies help with investigations.

2. This public fight could affect private orders from the government.

3. The consequences of a precedent permitting this sort of coding conscription are likely to be enormous in scope.

4. Most ominously, the effects of a win for the FBI in this case almost certainly won’t be limited to smartphones.

Bill Gates is siding with the FBI and says Apple should unlock the phone of the San Bernardino shooter. In an interview with FT, the Microsoft founder simply reiterates the Justice Department’s claim that this is a one-off case and the FBI is not asking for a general unlocking tool.

As the standoff between the Department of Justice and Apple Inc. continues over an iPhone used by one of the suspects in the San Bernardino terrorist attacks, 51% say Apple should unlock the iPhone to assist the ongoing FBI investigation. Fewer Americans (38%) say Apple should not unlock the phone to ensure the security of its other users’ information; 11% do not offer an opinion on the question.

While it might be understandable that many members of the general public have not realised the implications of such action – it is worrying that the man behind the world’s most widely used operating system have not.

The infotech war has begun, for real.

First we had the fight over illegal file sharing, creating a divide between Big Entertainment backed up by Big Government and a large portion of the general public. (Young people in particular.) Parallel we have had the fights between Big Telecom and activists campaigning for a free and open internet. And the struggle between Big Intelligence and civil rights / privacy advocates.

Then came Edward Snowden, providing actual proof of what our governments are up to. This created an even bigger splash, still causing ripples.

And with the San Bernardino iPhone backdoor/unlock case between the FBI and Apple the tech sector will have to choose between loyalty to its’ customers or abiding by overreaching anti-terrorism and anti-privacy legislation. That ought to be easy enough. The money is with staying loyal to customers and their right to privacy. But it’s not. Not even Silicon Valley might be able to stand up against the state monopoly on violence.

The stakes are sky high. The San Bernardino case is not just about that single case or even just about privacy. It’s about secure encryption – imperative for safe communications, online banking, medical records, confidential information, trade secrets and public affairs. Apple cannot back down on this one.

This might be what finally will unite all sorts of activists and the Valley. I rather hope so. Alone, it’s very difficult to stand up against the government (and related special interests). But if the Internet generation, net activists, civil rights defenders and tech companies stand together — we might stand a chance.

Unjust laws will stay unjust if no one stands up and fight them. Civil rights will be eroded if no one stands up to defend them. There are no limits to what governments will try to justify under the pretext of security — that, by the way, is an illusion.

Now is the time for activists (who know how to actually change politics) to team up with Silicon Valley (where the money needed to make campaigning effective is).

We can win this one — and at the same time establish a red line that governments will have to recognize.

But it will be dirty. It’s all about power and control.

Related: Apple’s FBI battle is just the beginning of a reality check for the tech sector »

0
By HAX on February 20, 2016 in Apple, Cryptography, Data Protection, IT security, Snowden, US 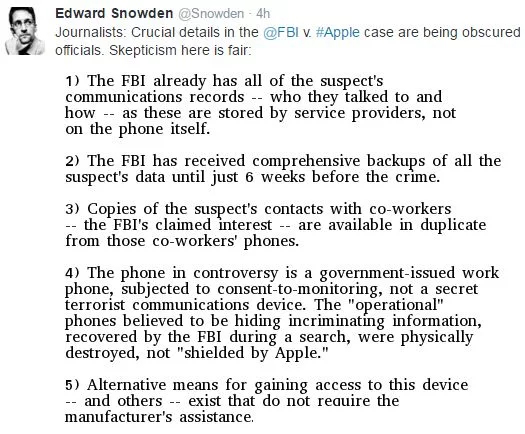 The ruling Chinese Communist Party has announced new regulations that will ban foreign companies from publishing online media, games and other “creative” content within China’s borders from next month.

The “Regulations for the management of online publishing services” also ban foreign-invested joint ventures from engaging in online content provision, according to a copy of the rules posted on the official website of China’s Ministry of Industry and Information Technology.

And any Chinese companies wishing to produce online creative content, including audio, video, games and animations, must first seek official approval from the country’s media regulator.

This is big news — changing the situation in China from bad to worse.

Tell Netflix NOW: “Stand up to Big Media bullies and do not block pro-privacy VPN technology.” »