A first look at the Wikileaks #Vault7  leak on CIA hacking and mass surveillance.

The Federal court of Justice (BGH) has ruled that the government must bring US whistleblower Edward Snowden to Berlin to answer parliamentary questions on the NSA, according to the Süddeutsche Zeitung.

The Local.de: High court: Snowden must come to Berlin »

The Washington Post argues in an editorial that president Obama should not pardon NSA whistleblower Edward Snowden.

This is rather odd.

The newspaper is turning against one of its own sources, as the WP was more than happy to be one of the media partners publishing Snowden’s material. This even landed them a Pulitzer prize.

The Intercept: WashPost Makes History: First Paper to Call for Prosecution of Its Own Source (After Accepting Pulitzer) »

Accusations that Pentagon retaliated against a whistleblower undermine argument that there were options for Snowden other than leaking to the media.

The Guardian: Snowden calls for whistleblower shield after claims by new Pentagon source »

The Guardian: How the Pentagon punished NSA whistleblowers »

0
By HAX on May 4, 2016 in Civil liberties, Democracy, Human rights, Manning, NSA & Snowden, Privacy, Rule of law, Snowden, US, Wikileaks

When you first go on duty at CIA headquarters, you raise your hand and swear an oath — not to government, not to the agency, not to secrecy. You swear an oath to the Constitution. So there’s this friction, this emerging contest between the obligations and values that the government asks you to uphold, and the actual activities that you’re asked to participate in. (…)

By preying on the modern necessity to stay connected, governments can reduce our dignity to something like that of tagged animals, the primary difference being that we paid for the tags and they’re in our pockets. It sounds like fantasist paranoia, but on the technical level it’s so trivial to implement that I cannot imagine a future in which it won’t be attempted. It will be limited to the war zones at first, in accordance with our customs, but surveillance technology has a tendency to follow us home.

Edward Snowden in The Intercept: Whistleblowing Is Not Just Leaking — It’s an Act of Political Resistance »

A newly published study from Oxford’s Jon Penney provides empirical evidence for a key argument long made by privacy advocates: that the mere existence of a surveillance state breeds fear and conformity and stifles free expression. Reporting on the study, the Washington Post this morning described this phenomenon: “If we think that authorities are watching our online actions, we might stop visiting certain websites or not say certain things just to avoid seeming suspicious.”

The projected growth maturation and installation of commercially available encryption — what they had forecasted for seven years ahead, three years ago, was accelerated to now, because of the revelation of the leaks.

The Intercept: Spy chief complains that Edward @Snowden sped up spread of encryption by 7 years » 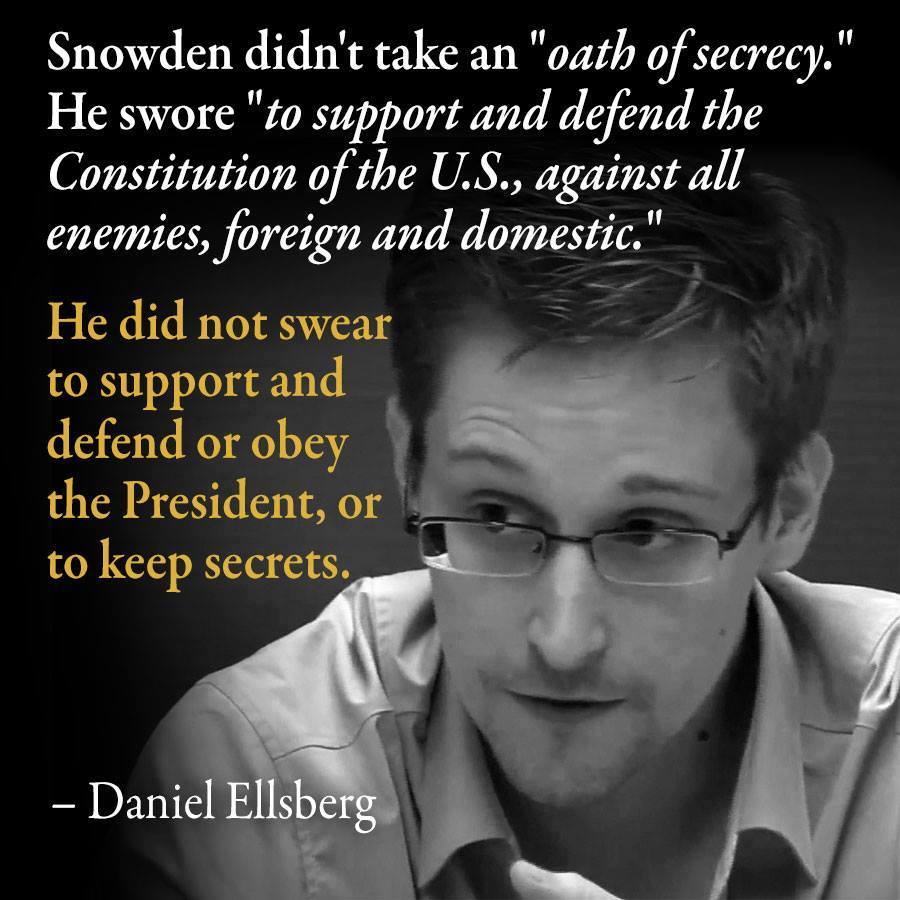