(Disclaimer: Yes, it’s RT – a known Russian propaganda channel. But in substance, what is being said seems to be correct and valid.)

To see how blatantly false The Guardian’s claims are, all one needs to do is compare the claims about what Assange said in the interview to the text of what he actually said.

The Intercept: The Guardian’s Summary of Julian Assange’s Interview Went Viral and Was Completely False »

It is an obvious and grotesque injustice to detain someone for six years who hasn’t even been charged with an offence.

The day started with the rumor that Wikileaks editor in chief Julian Assange is dead. The reason seems to be the following mystifying tweets… 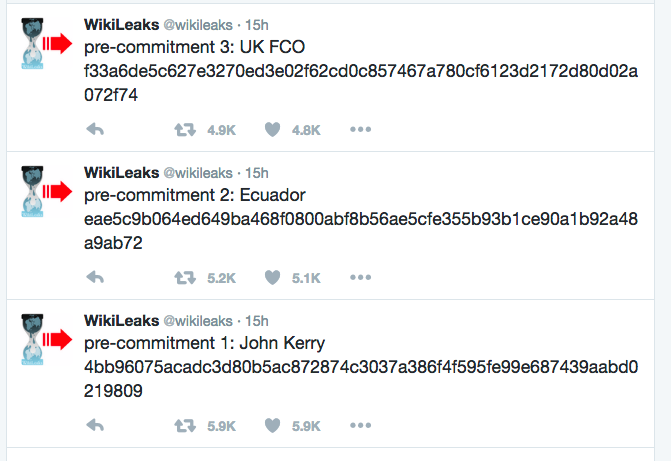 It’s possible that Assange made arrangements for a “dead man’s switch” release of content—that if he were arrested or otherwise rendered incommunicado, a cache of files held back would be released in an effort to damage the states and parties most likely involved in cutting him off from communication with WikiLeaks’ staff.

Wikileaks also tweeted that Assange’s Internet connection has been cut off by a “state party”. But nothing about Assange’s health.

At the same time, we learn that Swedish prosecutors will not be able to interview Assange this week. The date has been changed again – this time by Ecuador – to November 14. The reason is said to allow for Assange’s lawyers to attend.

If I may speculate, I guess that Assange would like to focus on the Clinton e-mails and the US election campaign before tackling the Swedish case. And there might be real security issues. Recently one of Assange’s UK lawyers was killed, falling in front of a London underground train. So maybe Assange simply doesn’t want any unknown people in his quarters before the US elections.

Meanwhile, in the US everyone is waiting for the next batch of leaked Clinton e-mails from Wikileaks.

There has been controversy, turbulence, and drama. It has been ten very interesting years. Books have been written about Wikileaks and its editor in chief, Julian Assange. And more books are to be written, for sure.

But a day like this, I would like to address the core issue: Wikileaks contribution to a democratic society.

These ten years, Wikileaks has exposed politicians cheating, lying, double-crossing, betraying, misleading and robbing the public in countries all over the world.

All of this in a landscape where traditional media organisations sometimes have been unable or even unwilling to investigate and expose those in power.

This is what really matters. This is the democratic legacy of Wikileaks.

A Swedish regional high court today decided that Wikileaks editor in chief Julian Assange is to stay under arrest.

However, an interview to decide if Assange is to be charged will be conducted in the Ecuadorian embassy in London, by an Ecuadorian prosecutor and in the presence of a Swedish prosecutor. This interview is to be held mid-October.

The normally so media shy Swedish prosecutor Marianne Ny today held a press conference about the Assange case. Nothing new was presented, the prosecutor’s office repeated its talking points and there was mention of yet another half-hearted attempt to interview Mr. Assange at the Ecuadorian embassy in London. (Something Ms. Ny have avoided to do for years, thereby keeping the investigation open and Mr. Assange at bay.)

It might have been her last chance to play the media by her rules. On prime time Swedish national television tonight, the investigative team at SVT Uppdrag Granskning had an hour-long special about the Assange case. (The program in Swedish » | A summary of some of the findings in English ») It is pretty obvious that Swedish authorities are very interested in getting Mr. Assange to Sweden – even though it has been and still is possible to interview him in London in person, online or over the phone.

Here we should keep in mind that Mr. Assange has not been charged with any crime. It’s all about interviewing him in order do determine if there is a case against him – in a rather thin case of suspected sexual misconduct in Sweden. Basically, this is total judicial overkill and »special treatment« just because he is a rebel, truth teller and a threat to important people in power.

Even a UN human right panel has voiced protests about the way Mr. Assange is treated, being tucked away in the Ecuadorean embassy year after year.

Next Friday a Swedish regional high court will – once again – look into the issue of Mr. Assanges’ arrest warrant. The last time, they upheld the decision, as Ms. Ny then was instructed to get the interview done and over with. Again, she didn’t. This coming Friday, the court may not show the same patience. Or it may, as there are powerful interests involved.

Finally, the reason that Wikileaks editor in chief Julian Assange does not want to go to Sweden for an interview is a fear that he might be extradited to the US. Todays’ tv special made it clear that there might be good reasons to fear such a development. (Even though the UK might also hand him over to the US Justice department, but at a very high political price.)

The general impression is that things might start to move in the Assange case. But I wouldn’t hold my breath…